Rattlesnake meat is white, tender, and tastes like a cross between frog legs and turtle. While there are a lot of rib bones, a big rattlesnake will have a backstrap like muscle that runs the entire length of the backbone. Once cooked, that muscle will peel out easily, giving the diner a boneless bite of goodness. 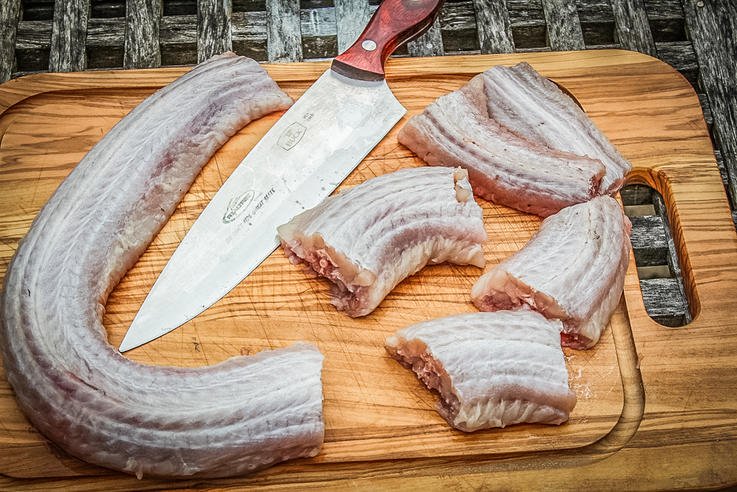 It’s best to leave them alone, but if you do get a fresh rattlesnake, you might as well eat it.

Let me start this blog post with a caveat. I hate to kill a snake. Any snake. I like snakes. Even the venomous speciels. I can’t count the times I’ve shared a western Kentucky fishing hole with a cottonmouth. Or squirrel hunted in a copperhead’s backyard. As long as I see them first, it’s all good.

That said, I’m a realist. I know that venomous snakes and small kids, or pets, or livestock just don’t mix. I know there are people who consider a dead snake to be the only good snake on the planet. From time to time, a buddy will call and report a recently deceased rattlesnake in case I want it. I usually do. While I might not kill a rattlesnake unless I have no other option, I’ll dang sure eat one if I get the opportunity.

Rattlesnake meat is white, tender, and tastes like a cross between frog legs and turtle. While there are a lot of rib bones, a big rattlesnake will have a backstrap like muscle that runs the entire length of the backbone. Once cooked, that muscle will peel out easily, giving the diner a boneless bite of goodness.

Think you might want to try one in the future? Here’s how wildlife biologist Joe Lacefield and I skin and process a rattlesnake for the table, T2T style. Save the skin for a hat band, a nifty wall display, or do like Joe and use it as a decorative backing for a self-bow.

1 | Always remove the head before handling a rattlesnake

Step 1. Remove the head. Dead rattlesnakes can still bite. It’s a nervous system deal, similar to a turkey gobbler that flops around for a few minutes after a fatal shot. I can’t stress this enough, don’t mess with the head. Don’t take any chances. If the head wasn’t removed by a shotgun blast, use a long-handled hoe or a machete to remove it from a distance. Use a long-handled shovel to pick it up and dispose of it safely, away from curious pets or kids. If you can’t remove the head from a safe distance, just don’t mess with it at all. While rattlesnake meat is great to eat, it isn’t worth receiving a bite.

Just like wild mushrooms, you might only get one chance to mess this up. If you aren’t confident in your ability to do it safely, find someone that is. Timber2Table is not responsible for any injuries incurred in this step.

Besides safety concerns, it’s important to always check your state and local regulations when it comes to killing or possessing a rattlesnake. They are a protected species in many areas. If you plan on gifting a rattlesnake to a friend in another state or area, check the regs in both places. Transporting a rattlesnake across state lines where they might be protected can result in federal wildlife violations.