Below is a label to help identify the fake “KNOCKOFF” label placed on 5-gallon pails. I have blacked out the Company name, address and phone number until they have been notified.. 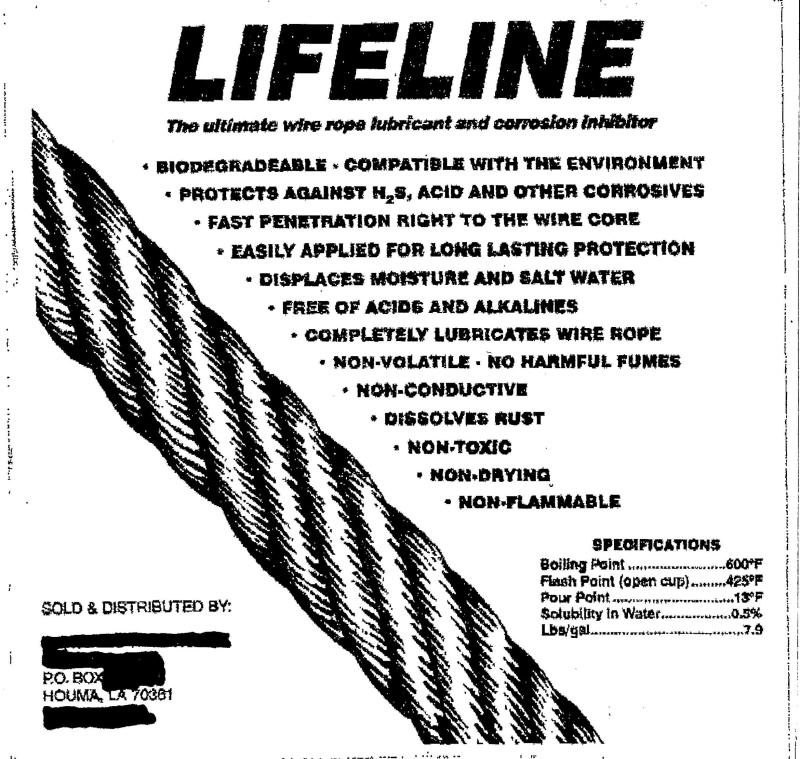 Re: Identification of LIFELINE wire rope lubricant and exposing counterfeit, fake or “knockoffs”.

Suspect items must be further investigated to determine whether they are counterfeit. When an item contains indications, but insufficient evidence, of irregularities such as non-compliance with agreed-upon specifications in the manufacturing process, it may be declared suspect.

I suspect that a substitute, knockoff or fake of LIFELINE wire rope lubricant is being produced and sold in the Gulf Coast area, There is a possibility that sales and distribution extends beyond the Gulf Coast area and possibly extends throughout the United States and abroad.

I am exposing a label to show one instance that I have identified and am in the process of shutting down. Laws exist to protect the consumer and I will use these available avenues including the various States’ Office of Attorney General to assist in identifying counterfeiting where exists with respect to LIFELINE.

If the label doesn’t have manufactured by: Applied Agrotech, LLC on it;  It’s a fake and in violation of Copyright and Trademark laws.

If you suspect you have purchased a counterfeit, fake or “knockoffs” of LIFELINE wire rope lubricant; Please report to mark@appliedagrotech.com or call 512-483-4057.